Get fresh music recommendations delivered to your inbox every Friday.

by problems that fix themselves 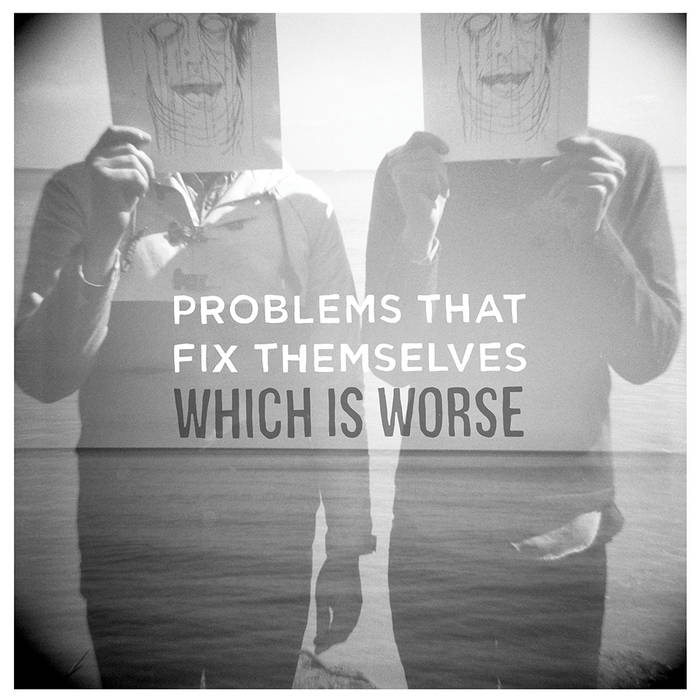 "Problems That Fix Themselves’ third proper album, Which Is Worse, will wrap the head of any listener in swaddling blankets. The majority of the seven pieces which comprise this latest offering from the Chicago duo (long-time contributor Alex Borozan is now officially the other half of founder Josh Tabbia’s electronic vision) display a marked emphasis on melody and structure, with only the closing track “Slowburn” containing the freeform assault on the senses with which Problems have pummeled audiences throughout the Midwest the past few years.

The sound bite sampling and mechanized beats that propelled the magnificent assortment of sounds on the last Problems’ release, 2010’s Seconds, have all but vanished in favor of melodic passages which move as naturally as the river flows. Seconds was far from cold and clamorous, abundant in warmth and melody, but much of it was buried under shards of experimentation that appeared to be taking place while the tape was rolling. That is the key difference on Which Is Worse: the experimentation seems to have taken place largely in the composing process, with the textural sounds arranged into the colorful, radiating pieces, giving the album a more refined sound, while still exciting and bold nonetheless.

The titular cut acts as the opening credits, with a Baldwin Discoverer table top organ cycling through a series of sustained chords against a gentle wash of white noise thunderstorm. “Maximum Occupancy” crawls across the speakers through a wormhole into “Black Elvis,” which explodes in a majestic myriad of incandescent phosphorescence, in shades of Tangerine Dream and Harmonia. The production is stunningly crisp, with a cohesion unprecedented in Problems’ catalogue. The sole vocal performance on the album appears on “Sunday Song,” a tender tune which unites contributing member Victoria Blade’s saccharine, distorted vocals with a melodious synth line, bringing side one to a sweet-tempered close.

Side two opener “8:62” features the drill and bass drum patterns often employed by Aphex Twin and Squarepusher back in the day. A diced-up air organ supplies the main melody while cherubic flourishes distantly circle overhead. “Elsie Mary” paints a serene, understated landscape that is not unlike those explored by early pioneering electronic artists in Europe that Brian Eno sought out. The aforementioned “Slowburn” finishes off the album in an abrasive, terrifying menace of sonance that is absent from the six tracks which precede it.

Perhaps the only perceivable shortcoming of Which Is Worse is the brevity of the album, clocking in at around 35 minutes. Maybe Problems ascribe to the old vaudevillian adage, “Always leave them wanting more.” Regardless, with not a wasted note to be found, the album is comforting sonic bliss that benefits from repeated listens and can be done so ad infinitum at such a short running time. Chalk up another one for Problems That Fix Themselves."
-Peter Cook, Already Dead Tapes, 2014

problems that fix themselves Kalamazoo, Michigan

we use digital and circuit bent electronics to create bedroom electronica tempered with harsh noise.

currently based in Detroit and Atlanta.

Bandcamp Daily  your guide to the world of Bandcamp

Bonobo stops by to talk about his new record Fragments